Office 365 Groups not showing up in Outlook

I had a request recently from a client of mine, who was not seeing all of the Office 365 Groups (that had Microsoft Teams instances) showing up in Outlook. 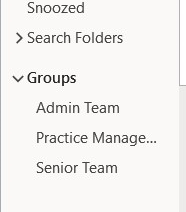 Typically within the Outlook client (and web version for that matter) in the left hand menu you see a 'Groups' section, with Groups that you have joined underneath it.

The client had tried all sorts of things within the Outlook client, including going into Manage Groups | All, and then rejoining each the groups (that they were in fact already an owner of). In some cases, when attempting to join the group, they would get the error 'Your request could not be sent. Please try again later'.

Their main 'All Staff' also would not show up, which meant that people couldn't easily create a company event (luckily I had the group calendar app on their Intranet home page, so they could add events that way).

I found the article https://petri.com/hiding-office-365-groups-exchange-clients which stated 'Office 365 will hide groups created by Teams from Outlook by default'.  I understand that this may have been a strategy from Microsoft to stop the clogging up of Microsoft Groups showing up in Outlook, but my company was quite small and needed to show all of their groups.

To fix the issue, I first ran:

Once connected, I ran:

This listed each of the groups, showing that in fact that many were configured to be hidden from the Exchange client (HiddenFromExchangeClientEnabled attribute).

I then ran Set-UnifiedGroup -Identity "<group name>" -HiddenFromExchangeClientsEnabled:$false against each group that needed to be exposed.

After exiting Outlook and starting it again, the list of groups then showed up. As a side benefit, as the All Staff group was now showing up, people could easily enter company events through the Calendar area of Outlook.

Posted by Alan Coulter at 5:50 PM No comments:

I am a big fan of Microsoft Patterns and Practices (PnP) and use it both from a scripting perspective (PowerShell) and web development perspective (PnPJS).

Recently I was involved in building an automated project site provisioning process for a client, using LogicApps and FunctionApps. I had generated a number of PnP templates for a site (e.g. 1 for site columns/content types, 1 for lists, 1 for features and 1 for pages/navigation) using the Get-PnPProvisioningTemplate -out template.pnp -Handlers


Posted by Alan Coulter at 7:21 PM No comments:

At one particular client site, after we applied the January 2018 CU to their SharePoint 2013 environment, we found that one site column, which was used in multiple site collections, all of a sudden had a space in its internal name (which is not valid). For the end user, this was preventing them from creating new Document Sets within a library. What I found was that even though the offending field wasn't in the Document Set Content Type that they were trying the use, the fact that the invalid field was associated with the list (via another content type), during the process of creating the document set it throws an internal error "The schema for field with this name is wrong or missing. Field 'Meeting Type'".  As the Document Set errors were not discovered until several days after the patch was applied, we could not roll back to the snapshot taken prior to the CU being applied. To fix the issue (as we didn't want to wait for Microsoft Support), we created a new field, added it to the Content Type, removed the offending field, then had to go into every library and physically remove the old field from there also.

Another issue we experienced with the Jan 201 CU was that also SharePoint thought the User Profile Sync service was started, under the covers in the Services.msc snap-in, it was not (even though it was set to Automatic). The underlying error in the Event log was 'Detection of product '

Note that for another customer, were I had setup a SharePoint/Project Server 2016 environment, the January 2018 CU ships with a corrupt resource file 'PWA.en-us.resx', which prevents you from administering projects (i.e. all action buttons in the ribbon are disabled). To fix this, we overwrote the file with a copy of the PWA.resx file.
Posted by Alan Coulter at 11:27 AM No comments:

I recently was tasked to amend a document submission/review workflow, where documents could only be submitted (via changing a status to 'Ready for Review') during a particular window. Typically the window was only for a certain day each month, between 7am and 7pm.

I first started by creating a separate list, which would contain a single list item that had a 'Date From' and 'Date To' field. I then added a query list action with a CAML query of:

Note: I substituted <Now/> for <Today/> and also a Workflow variable for the current date time (derived from a Calculate date action) to see if it made any difference.

I found the article https://community.nintex.com/thread/3213, where Paul Svetleachni said:
"The time is used to calculate if one period of time turns into next day or not. Thus only calculated based on actual day and hours are used if it is next day or not. So, filtering by specific hour/min/second is not possible, it is only used to determine if next day is added or subtracted based on calculation of date." So I tried various attempts using a set a condition action (based on https://community.nintex.com/thread/10160?commentID=32146#comment-32146), which didn't work for me. I amended this logic to the following, but still no luck:

In the end I decided to convert the dates into numbers, then do my comparison that way, which WORKED!

7. Update the set condition action shown above to use the numbers instead of dates in the comparison:


I hope this helps someone, as I was pulling my hair out trying to figure out why such a simple thing such as a data range comparison doesn't work naturally within SharePoint (and therefore Nintex Workflow).
Posted by Alan Coulter at 11:24 AM No comments:

I ran into an issue today whereby my SharePoint installer would crash after all of the prerequisites were installed and I tried to run setup.exe. After delving a little deeper I found the article https://support.microsoft.com/en-us/help/3087184/sharepoint-2013-or-project-server-2013-setup-error-if-the-.net-framework-4.6-is-installed.

Microsoft's original response to this problem was to postpone the installation of .NET 4.6.1 until after you've installed SharePoint - well that doesn't help me when the server image already has it baked in.
Then Microsoft came out with a fix, which required a DLL file to be copied into the updates directory of the installation media (i.e. copy everything to a local directory, then copy in the dll file). See https://download.microsoft.com/download/3/6/2/362c4a9c-4afe-425e-825f-369d34d64f4e/svrsetup_15-0-4709-1000_x64.zip for SharePoint 2013 patch file.

In my case it still wasn't working, but I later discovered that it was because I was also trying to slipstream a Cumulative Update into the installation (which I normally do to speed up the installation process and remove the need for multiple PSConfig operations).

So the morale to the story - if you want to use this fix, you can't slipstream any updates into the installation also.

On a recent project I had the requirement to randomly display a staff profile on the home page of the Intranet. The staff profile would provide some basic details of the person (with a head shot), then on clicking the item the user would be redirected to a page that displayed a bunch of fun questions and the person's response to each question. The web page used its own custom page layout and associated content type to store all of the answers.

Now we've probably all seen various custom developed web parts in the past, utilising calls to the User Profile Service or some other list via CAML queries. We've probably also seen Content Query Web Part solutions. For this project I was determined to leverage search as much as possible, reducing the continual queries to the backend data source. So my technical challenge was not in getting the results (as search query rules/result sources do a good job of that); but rather randomly selecting an item to display from the result pool.

So in order to make this magic happen, I went about with the idea of creating a custom group display template (i.e. to generate the seed) and a custom item template, whose job was to render the item if it was told to do so. So how do you do this? Quite simply, you add your own variables to the Search context!

In your control template, you put the following :

Then in your item template, you put the following around the outer part of the display template:

I hope this helps someone - it took a little bit of playing around to discover how to get this working, but in the end it was really quite simple.
Posted by Alan Coulter at 4:49 PM No comments:

Get all Office 365 Video Channels, Groups and Delve Boards with REST

Office 365 has introduced 3 new portals recently: Videos, Groups and Delve. Behind the scenes, the architecture of Videos and Groups is such that each Video channel is a site collection and so is each Group. For Delve boards, each board is saved as a Tag and when you add a document to a board, the document is tagged with the name of the board.

If you are working on a solution for Office 365 and want to integrate Videos, Groups or Delve, here is how you can get a list of all of them using the SharePoint REST API:

1) Get all Office 365 Video Channels with REST API:
https://siteurl.sharepoint.com/_api/search/query?querytext='contentclass:sts_site WebTemplate:POINTPUBLISHINGTOPIC'&SelectProperties='WebTemplate,Title,Path'&rowlimit=50

3) Get all Delve Boards with REST API:
https://siteurl.sharepoint.com/_api/search/query?querytext='(Path:"TAG://PUBLIC/?NAME=*")'&Properties='IncludeExternalContent:true'&selectproperties='Path,Title'&rowlimit=50
Posted by Alan Coulter at 11:34 AM No comments:

The link below provides the fix, which is an update to the compat.browser file.
http://blog.sharepointexperience.com/2014/10/did-safari-or-ios-8-break-your-sharepoint-2010-site/
Posted by Alan Coulter at 11:24 AM No comments: